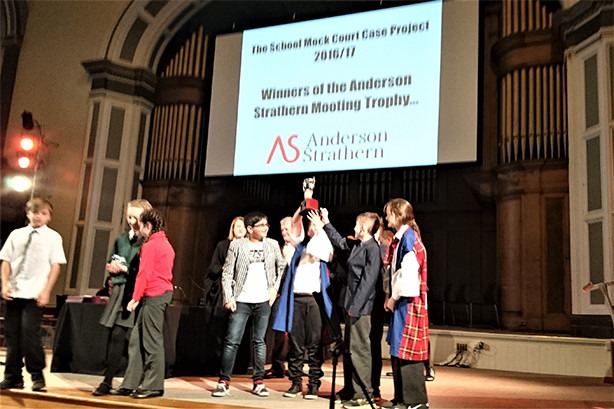 The School Mock Court Project was founded by Gerald Murphy of Chamberlain McBain Solicitors who had a desire to integrate a project into schools that children would enjoy and which would allow them to experience first-hand what it is like appearing in a real court as a solicitor or witness before a real Sheriff.

Hazel McLauchlan, a solicitor within our family law team, has volunteered as a tutor on the project over the past two years. This year she tutored the Pursuer’s team from Leith Walk Primary, helping them with their written court pleadings and advocacy skills. The project centres around a contract dispute between a mobile phone company and a grandmother. The classes are split into two teams- Pursuers (the mobile phone company) and Defenders (poor old Mrs Telfer).

Each child is assigned a role within the project and the project involves not just understanding the role of a lawyer and presenting a case to the court, but also involves the children making their own gowns for court, preparing productions, court artwork, journalism and even maths! Hazel very much enjoyed seeing her class progress over the weeks, with the children growing in confidence and really embracing the project. The cherry on the top was of course seeing Leith Walk Primary take home the winner’s trophy at the recent finals!

Fill in our form