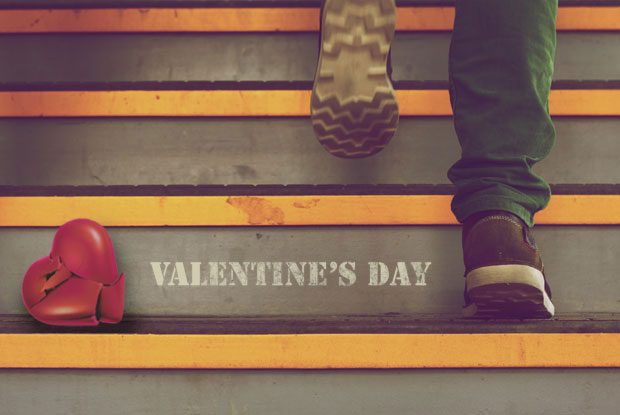 Valentine’s Day has been celebrated in the UK since the 17th Century.

Not every country in the world takes part in this ritual of giving cards and gifts to loved ones or people they admire from a distance. And come February 14th, many people in the US, Canada, Mexico, Australia and France as well as the UK, will be turning their thoughts to breaking up rather than blossoming romance.

As with the post-Christmas and New Year period in January, Valentine’s Day typically brings about a spike in people filing for and enquiring about getting divorced – as much as a 40% increase according to one study.

What are the likely reasons for the rise in people considering divorce in mid-February?

So called “expectation holidays” such as those mentioned above are often a trigger for people to take action if they’re in an already unhappy marriage.

Looking back on how things used to be

In the run-up to Valentine’s Day with all the cards, flowers, chocolates etc. in all the supermarkets, it’s common for people to think back on how things were when they first met.

Unfortunately, in a lot of marriages, people stop putting in the effort to make their spouse feel special, even on the most romantic day of the year.

Valentine’s Day can be a stark reminder that a spark has gone from a relationship and may have been extinguished for some time.

A step too far after the festive period

A stressful and unhappy festive period can put a strain on many marriages, especially if things have been difficult prior to that.

Coming less than two months after Christmas Day, February 14th being ignored by their spouse may prove a step too far for some.

According to research, women purchase approximately 85 percent of all valentines.

Seeing other people in love

Watching other people being romantic around Valentine’s Day is another trigger for people to think about divorce when they feel their marriage has run its course.

, seeing how their friends are spending the day with their other half can be the last straw and spur them into taking action.

For some people the thought of filing for divorce at Christmas time is just not practical and doesn’t feel right. We know many people ‘put off’ contacting a lawyer about a divorce until the dust has settled on the holiday season.

When the weather starts to get better around mid-February, people feel like they have more energy and it’s traditionally a time when thoughts turn to freshness and new starts. In cases of unhappy marriage, Valentine’s Day can provide the springboard for someone to take action to bring their marriage to an end.

Coping with Valentine’s Day after a divorce

For those who’ve recently divorced, Valentine’s Day can be a difficult celebration to deal with. When someone is still hurting after the breakdown of their marriage, February 14th can feel like a day when the whole world is against them with couples going out for romantic meals, films about love in the cinema and friends/family making special plans.

With this in mind, we’ve come up a number of ways below to make things that little bit easier when it appears like everyone is in a happy and stable relationship.

February 13th, 14th or 15th – treat them all the same. Valentine’s Day is just another day in the calendar with the same number of hours and will quickly pass.

It can do people good to have a change of scene and get away from potentially painful memories and thoughts around Valentine’s Day.

Looking back on the past after a divorce rarely does any good. Taking a different perspective and focusing on what it still to come is another way to shift attention from unhappy times to more exciting future plans.

Many people make Valentine’s Day about what they’ve lost or don’t have. One way to lessen the emotional impact of it is to be grateful for all the other positive things in life.

Let the feelings come out

Bottling up feelings doesn’t do any good and there’s nothing wrong with letting emotions show and feeling sad about how things haven’t gone to plan in a marriage.

Valentine’s Day isn’t necessarily a happy one for people in marriages or long-term relationships. When things have come to an end for whatever reason, the time of year shouldn’t matter.

If you enjoyed this article you should also read: Life After Divorce: 10 Tips to Help You Adjust